Trucks. Not the sexiest topic or specifically popular, in comparison to cars, one may think, but the last days were full with announcement and the interwebs buzzed with excitement. All this not, because people – again – were voicing their frustration over too many trucks on the roads, but because electric and autonomous trucks were the talk of the town.

Tesla Semi Truck unveil to be webcast live on Thursday at 8pm! This will blow your mind clear out of your skull and into an alternate dimension. Just need to find my portal gun …

But let’s start with what we’ve seen this week:

Tesla introduced their semi and blew everyone’s mind. Not only the performance metrics, but also design (and the price) surpassed expectations and put new benchmarks in the books. From 0 to 60 mph with 80 tons load in 20 seconds. 500 miles range and a cockpit design from space. Not only one touchscreen as seen in the Model 3, but two of them. And the driver sits in the middle. More spaceship than truck. 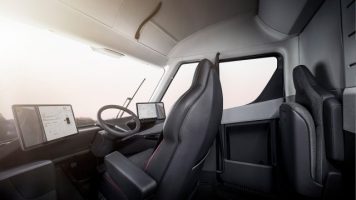 The price starting at $200,000 is $50,000 higher than for the average Diesel truck, but the costs per mile are 25 Cents lower. This lowers the fuel costs by more than $250,000 for one million miles, and that makes the higher purchasing costs a good bargain.

Even though long haul trucking companies are skeptical, short distance operators like the ones around like Long Beach are excited. Environmental regulations will soon ban Diesel trucks on those routes. Several large retail chains pre-ordered Tesla’s semi. Wal-Mart ordered 15, and Canadian retailer Loblaw 25.

Framo is a Saxonian company equipping semis between 7.5 and 44 tons with electric drive-trains. The range is up to 100 miles – depending on the load and driving style.

Siemens operates between the ports of Los Angeles and Long Beach a test track with pantograph-trucks. Similar trials have been done in Germany and Sweden, even though they are impractical for long stretches of highway driving.

The design of Tesla’s semi is not just futuristic looking, it also comes with Autopilot. Even though Elon Musk and all other truck manufacturers are careful with their announcements, it’s clear that the end for truck drivers has begun.

At the beginning the drivers will still be in the truck and supervise the autonomous drive mode on highways. In the next phase the trucks will barrel down the highways without drivers on board and just have them enter the trucks and take over for off-ramp and city drive. And finally, probably faster than most assume, trucks won’t need any drivers at all.

Some companies already demonstrated this. Californian startup Embark surprised with the news that since October their trucks have been doing commercial hauls along a 650 mile highway stretch between El Paso in Texas and a distribution center in Palm Springs in California. The freight contains refrigerators.

Uber has demonstrated a similar feat (but only one time) by delivering beer cans over a 190 mile distance.

The Mountain View-based startup Peloton started production for its platooning retrofit kit. Starting next year current trucks of several manufacturers can be equipped with a platooning kit and used in convoys. Increased safety and lower fuel costs are targeted.

Uber is not bringing the problem to attention by facts and figures, but with a human story. A truck driver who’s missed too many family events, because he was on the road. The function “Bring me home” helps drivers to find and pick a load that brings them close to their home.

Who would have thought that trucking can be so sexy? The interest in electrification and self-driving technology is spilling from cars to trucks. Considering the increase in transport needs, a disproportionately high rate of traffic accidents involving trucks, lack of drivers, and an increase in environmental awareness, this is a development that we can only welcome.