So far General Motors has kept technical information about their autonomous vehicles under the lid. The cars are based on its electric vehicle Chevrolet Bolt, which has all sensors integrated and of which several hundred are being tested in San Francisco and Phoenix. Now for the first time GM invited journalists to test ride them.

On the roof five Velodyne Puck Lidars are mounted, as well as 14 cameras. Additional eight long range radars, as well as 3 medium range. Latter ones can be swiveled to better see into tight places, similar to how a human driver would move the head. Several shor range radars are arranged around the car giving a better view of objects close to the car. The big advantage to ultrasound sensors is that such radar sensors can tell you where the object is.

The vehicles are equipped with several redundant systems to make sure that the failure of one system can still have the car operate safely or come to a safe stop. In cars like these it’s not expected anymore that a human passenger takes over control.

As can be seen in the following two images, all those additional sensors have an effect on the wiring. The first one shows the wiring of a regular Chevrolet Bolt, the second one the wiring for a Bolt equipped with all those sensors. 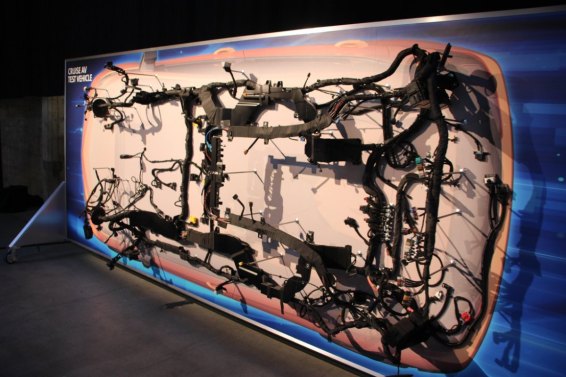