Whenever Tesla announces their quarterly results, you better be prepared for surprises. Like this time as well for Q2/2018, and there is one bad and several good news. But let’s start in an orderly fashion.

Tesla-CEO Elon Musk announced in the shareholders’ meeting of having reached the highest revenue of any quarter so far. With revenues of four billion dollars the numbers were significantly higher than from the prior quarter, which saw 3.4 billion dollars, an increase by 17 percent. At the same time the losses per share rose from 4.19 to 4.22 dollars, which brings the losses to 739 million dollars. The losses are below the three quarters in the past that saw over one billion dollars in money burnt.

Teslahad some challenges in reaching its own production targets of 5,000 units per week. In fact, Tesla had to install a second production line – the infamous “tent” – to make changes to the main production line. In the past quarter the company succeeded to reach 5,000 vehicles per week multiple times. So far the company produced approx. 60,000 Model 3.

End of August Tesla aims to reach 6,000 vehicles in a week. The third quarter projections are between 50,000 to 55,000 Model 3. With those production numbers the current profit margin for the Model 3 from roughly 15 percent will become significantly higher.

The focus is also moving away from production numbers to quality improvements. Despite the bumpy production ramp up, the Model 3 reached in July 2018 a higher market share in the premium mid-size sedan category than the BMW 3-series, Audi A4, Mercedes C, Lexus IS and Jaguar XE combined. 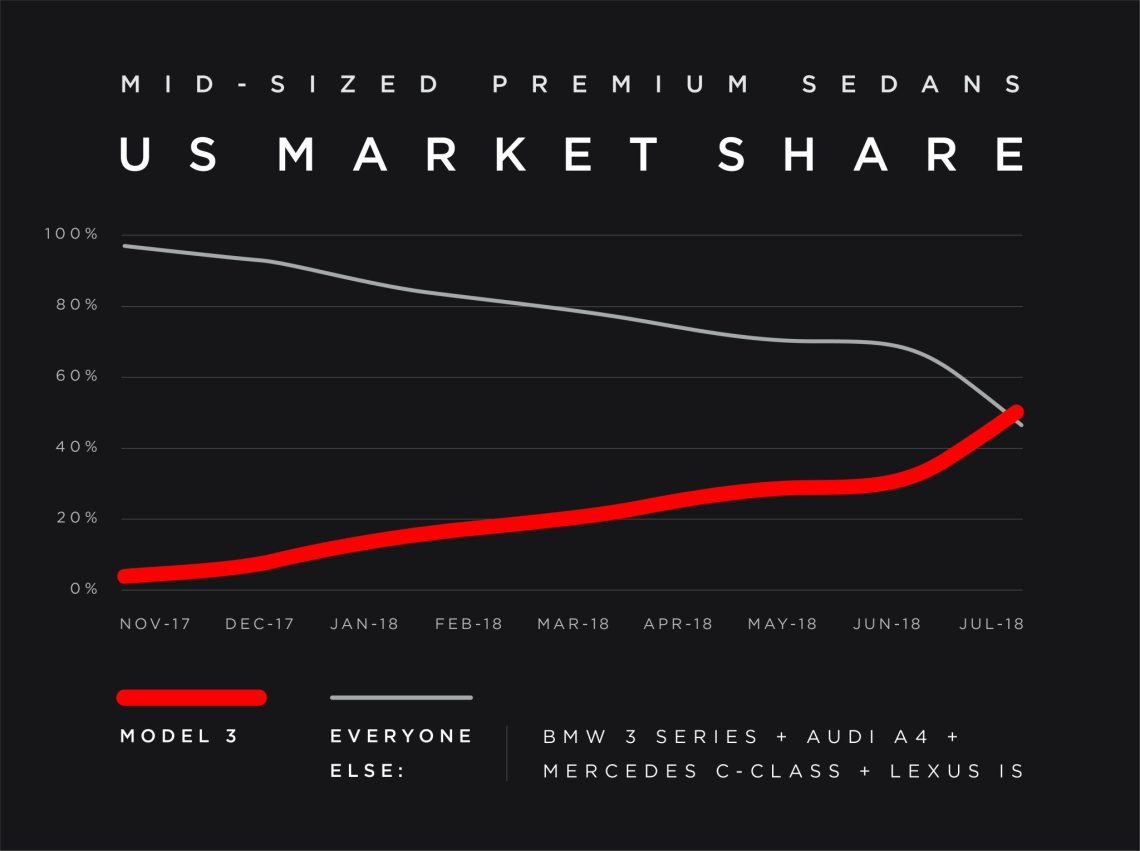 At the same time Tesla mentioned the five most common hand-in cars of new Model 3 customers. Those where Toyota Prius, BMW 3, Honda Accord and Honda Civic, and Nissan Leaf.

Next year the new Autopilot3.0  hardware is supposed to be delivered to customers, including a new processor that Tesla developed specifically for its AI-requirements. This processor is 10 times as fast as available today. Today’s Nvidia-GPUs have frame rates of 200 images per second, while the new Tesla-chip reaches a frame rate of 2,000 images per second. The processor is designed and optimized for Tesla’s neural network.

In 2016 Tesla hired a chip-expert and created its own chip-design division. The hardware for the Autopilot 3.0 is currently being tested and will be available as upgrade for existing customers.