Nine-and-a-half year after Tesla presented the Model S to the public (March 26th, 2009), more than six years after the first Model S was delivered (June 22nd, 2012), finally, German car makers are ready to manufacture their own competitive electric vehicles. Or more precisely, present them, because productions are scheduled to start 2019.

Anyhow, we can only be glad. The news has been reporting for years about this and that and the next Tesla-Killer, but still Tesla didn’t get killed, is doing fine, the Model 3 production is running high, only the announced Tesla-Killers haven’t materialized.

Porsche, Mercedes and Audi all have cars ready for production in 2019, and even BMW open orders for customers to pre-order the BMW iX3, which is coming after 2019. Anyhow, none of those cars will be a Tesla-Killer, but make Tesla only stronger. Those cars will all be Combustion-Killers. Traditional car makers will realize pretty quickly, how much sales for their internal combustion engine cars will drop in the wake of electric cars that they start selling.

Now Mercedes unveiled today the first of a series of 10 electric vehicles that the company wants to launch until 2022. The Mercedes EQC SUV is the first one. The performance data is quickly listed. The  EQC 400 4MATIC uses 22.2 kWh for 100 Kilometer, CO2-emissions are at 0 grams per kilometer (all preliminary figures). Two electric motors, one at the front, one at the back, give the car 300kW all-wheel-performance and a range of 320 kilometers. That’s not much, especially comparing that to Tesla’s Model (427 kilometers) or the Jaguar iPace (400 kilometers). The Lithium-Ion batteries with a capacity of 80kWh come from Daimler-subsidiary Accumotive. 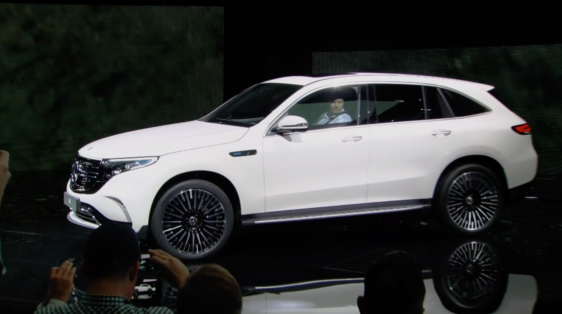 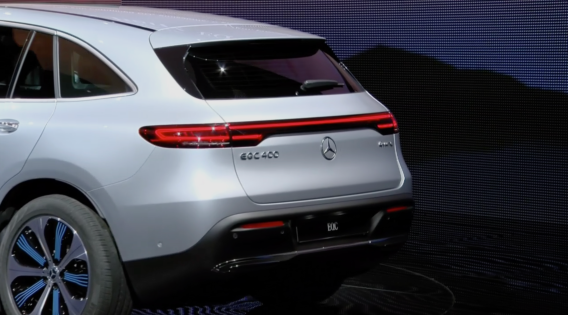 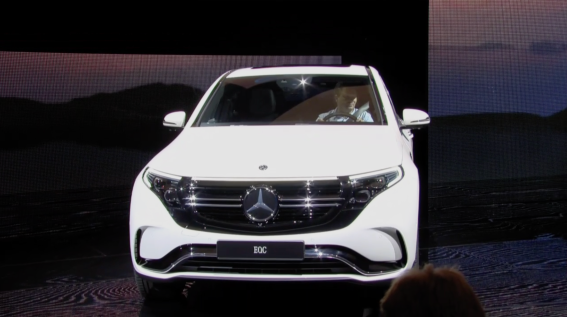 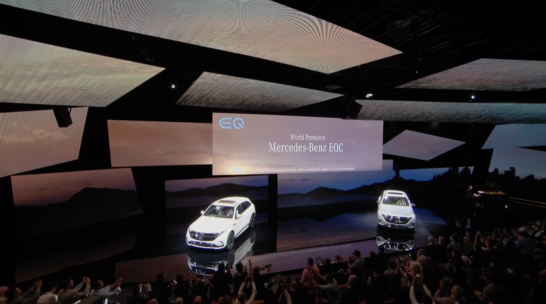 Mercedes plans to electrify their whole fleet, including transport, trucks, and buses. Since 2012 Mercedes has been offering the Smart Fortwo electric vehicle, which is struggling with keeping up with demand. Waiting times of more than half a year are bothering the company (and customers), and apparently Mercedes is losing money on each Smart sold. Maybe because of that there is not much will to increase production.

But back to the EQC. Surprising is the frame of the 4.7 meter long car. The front has a steel pipe frame, which is intended to increase safety. Mercedes-CEO Dieter Zetsche pointed to safety as one of the top Mercedes values.But that very frame now prevents the use of a frunk, as one is used to with a Tesla. The front grill, not really necessary with an electric vehicle, is sticking out very prominently. Why exactly? 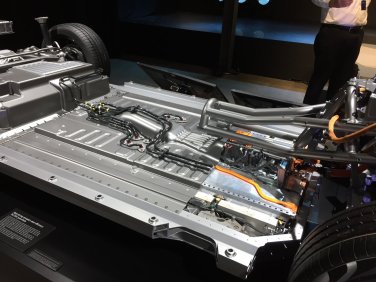 The overall construction seems to be based on an internal combustion engine car frame, that was bent to fit batteries for an electric vehicle. Compare that with Tesla’s design that was designed completely from scratch.

Considering the top safety rating that Tesla got with their design, the whole argument about the steel pipe frame’s necessity for safety reason looks pretty lame. It seems to deflect from the fact that Mercedes used a combustion engine frame and bent it to a battery vehicle frame. That’s not giving much praise for Mercedes’ frame designers, or the management, and their lack of ambitious goals. Was it to make suppliers, workers council and employees not go bollocks with a too radical redesign and required layoffs and reassignments of workforce?

Here a video with a view into the missing frunk:

The applause after presentation was clearly coming to an end very quickly. Sure, the audience is mostly made up of journalists, and they heard about the car details the entire day in workshops. But the car is not raising emotions. A totally different situation was the presentation of the electric Mercedes Silver Arrow a few days ago. Just look at the photo of Mercedes’ chief designer and compare that with the presentation of the EQC. The Mercedes EQC SUV is an unloved stepchild that they have to do, but their heart is with the Silver Arrow. And that’s palpable.

Summary: It’s great and commendable that finally the first electric vehicles coming into the performance vicinity of Tesla’s cars are being manufactured and offered to customers. The Mercedes EQC will certainly find customers and fans. The car is pretty conventional and frumpy,also pretty boring, and maybe exactly the car for Mercedes customers. Pointing to the future, innovative, as Zetsche mentioned multiple times, no, it is not. Too many of the wrong people are working here on the wrong product.

They want to be just a little bit pregnant. The performance data known so far is not even coming close to what Tesla offered in 2012, and now it’s the year 2018/19. For the automotive future that’s way too little. You would expect more from Mercedes.

Way more emotions are raised by Mercedes’ Swabian neighbor. Porsche with their second electric car manufacturing start in their history (the first one was between 1900 and 1902, with this vehicle in the Technical Museum in Vienna, Austria) is with the Taycan (formerly known as Mission E) on a promising path.

Sure, the Taycan and the EQC are playing in different categories, but at Porsche the eagerness and will to build a really good electric vehicle is palpable.

Mercedes folks! Have a coffee with one of your Porsche-neighbors and get some tipps!

Here is a video with the Taycan driving up the Großglockner alpine road in Austria:

This  article has also been published in German.