A small distraction, and the mishap happens. Whose fault it was that this Tesla-driver crashed into a tree today in Mountain View on Grant Road, corner of Martens Avenue, can just be guessed by someone like me who passed by the other line. Luckily, except some bent metal and a shaken tree, and some trashed trash-bins, nothing more serious had happened. It can be suspected that whatever scenario here caused the accident, an autonomous system with high likelihood would have prevented the accident.

It’s more than accidental that at the same moment a Waymo-Lexus-vehicle (formerly known as Google self-driving car) was trailing me, turned right on the shopping mall parking lot the street before, and came out from the lot opposite the accident scene. Hope to have that soon in customer hands. 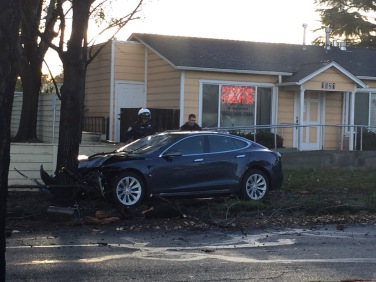 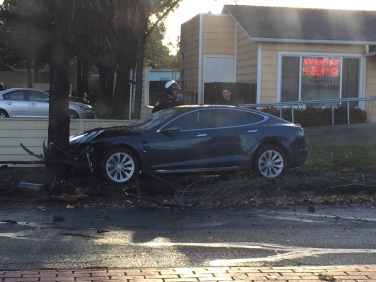