The Computer History Museum in Mountain View, California, played host for several trailblazers in the autonomous car area. At the event Driving Outside the Lines: An Afternoon with Udacity & Mercedes-Benz the winner of the DARPA Grand Challenge 2006 and founder of Google’ self-driving car group Sebastian Thrun spoke with Axel Gern, Head of Autonomous Driving at Mercedes-Benz Research & Development North America. The panel was followed by the brilliant enfant terrible George Hotz, who’s a pain in the behind for the NHTSA and founder of Comma.ai. The company is focusing on the development of hard- and software for autonomous vehicles.

Udacity, a MOOC that was founder by Sebastian Thrun after his time at Google, started offering the worldwide first nanodegree on developing self-driving cars. Mercedes-Benz is one of the 14 hiring partners. Currently across the industry companies are looking for developers in this field, and this course shall help fill the void.

After a short overview of the course program and introduction to the global student body, Sebastian and Axel discussed in front of 400 people in the audience the role of Mercedes and Silicon Valley to advance autonomous cars. Mercedes was one of the first companies that developed back in 1995 the first self-driving cars. Since then, many of the technological developments made their way into Mercedes’ Highway Pilot System or the Stop-Go-Assist in production cars. There are some reasons why this topic is now taking off. Computing power and algorithms back in 1995 were not at a level that were fast enough, sensors and processors were expensive, and AI has not yet reached breakthrough. Only now we can deal with the big data that sensors provide and analyze them in a timely manner. 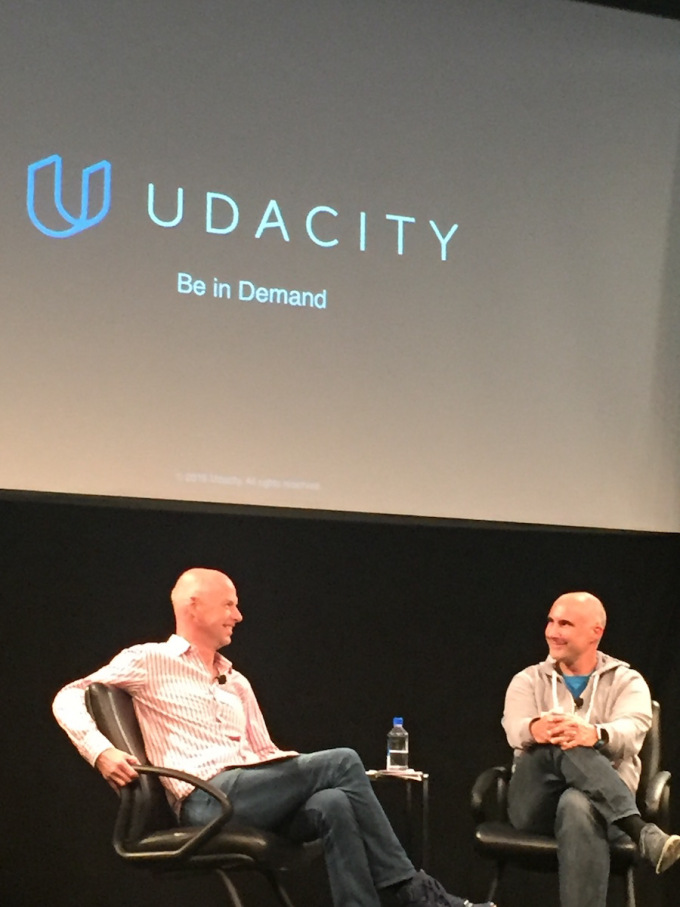 In regards to timeline Axel said that the first self-driving systems will be available for highways, city traffic due to its complexity will take longer. Also Axel thinks that the first generation of self-driving cars will be used only under certain conditions. That may exclude driving them under rainy or snowy conditions, or only within a certain geo-fenced area.

According to Sebastian the challenge is not so much technology. Technology is here and works. The problem is business models with autonomous systems. Aggressive strategies such as from sharing companies like Uber and Didi demonstrate that. Industries that will benefit from autonomous cars are real estate companies, because suddenly the little house on the prairie becomes accessible when I am driven by a car. Insurances on the other hand are threatened by this, as a large and very profitable share of their business comes from car insurance premiums, which will simply disappear. But other businesses and services will be created that focus around maintenance, cleaning, management of autonomous taxi-fleets, data services and more.

George Hotz was the second main speaker, who talked about the mission and business model of Comma.ai. Under the headline”ghostriding for the masses” and the goal that “Comma is the Android of self driving cars” he explained the recent pivot that his company did. Instead of creating and shipping a hardware and software kit with which one can transform a current car into a self-driving car, now Comma is just publishing a blue print for building the hardware names Comma Neo, as well as open sourced the code as Open Pilot. The source code and data can be found in the Github repository. 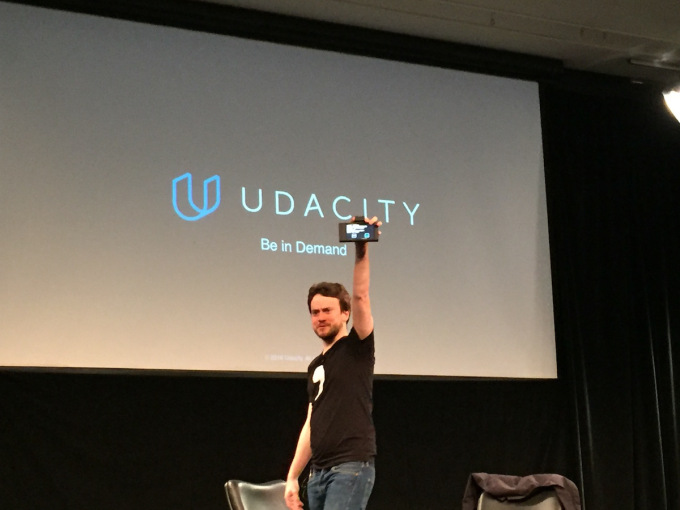 The brilliant George Hotz, who burst into the scene as a teenager by being the first one to jailbreak the iPhone, is considered the enfant terrible in the tech scene. With Tesla’s Elon Musk he has a bet running that his crowd-sourced self-driving system works better than Tesla’s system. With the NHTSA and California DMV he is exchanging punches because of testing autonomous vehicles on public roads. And he doesn’t hold back with his candid opinion on the autonomous car development status of the big automotive manufacturers. According to him the leaders (beside Comma.ai) are Google, Tesla, and Uber.
Despite or maybe because of this the audience and the investors love him. The Venture Capital group  Andreessen Horowitz invested three million dollars into Comma.ai. But Hotz is not just lashing out, he delivers. A few days ago he posted a video of the latest test drive showing the progress. Shipment of such a kit will not be done partnering with OEMs or Tier 1 suppliers. He did have talks with all of them, but the slow development cycles frustrate him. Instead he is betting on workshops and dealers that are on the search for new business models.

At the networking event after the talks I mingled with students from the different course batches (my own batch is starting on December 12th). Beside a robotics expert from tesla, I also met several computer scientists and electrical engineers, who work in consulting or at startups. Now they use this as a chance to move into a new and very interesting field.

At the parking in front of the Computer History Museum I also found Udacity’s self-driving car.

UPDATED: Now there are also the videos from the event available: