Almost exactly to the day a year ago at the CES 2018 Mercedes-Benz presented a concept car of an autonomous Smart – and closed off multiple lanes of a block of the Las Vegas Boulevard for demo rides. With the fine but important detail, that the Smart didn’t drive autonomously, it was remote-controlled! The journalists reporting about it were really puzzled..

And they were puzzled because almost exactly the same day four years ago the Stuttgarter performed a similar stunt at the CES 2015 with the autonomous concept vehicle F015. The Las Vegas Boulevard was partially closed to demonstrate the F015 – remote-controlled.

And you won’t believe it anymore, but Mercedes-Benz performed the same publicity stunt this year at the CES 2019. This time with the concept vehicle Vision Urbanetic.

Note: while other companies such as Aptiv/Lyft or AutoX shuttle conference attendees between hotels and conference venues with their robotaxis – in dense Las Vegas traffic and not on a closed portion of the Strip  – Mercedes-Benz has been showing remote-controlled concept cars, of which none has made it into mass production nor will they – with high probability – ever be put into mass production. They didn’t even make it into fleet test in at least one city on the globe.

As important concept vehicles and visions are, and the public presentation and discussion, at some tome there comes the moment where you have to turn them from concept to reality. Recently, Mercedes-Benz, Audi, and BMW seem to have regressed to building show cars, but not the mobility of the future.

And what is Mercedes-Benz presenting at the CES with much fanfare? Another combustion engine car! The red CLA Coupe didn’t not only seem to, it was the dinosaur among the electric and autonomous vehicles in the conference hall (North Hall). You had to see it to believe it.

The all electric Mercedes EQC was also showcased and attendees could sign up for test drives – and we have made an analysis of the car before. But to put that into relation: here is a picture showing conference attendees coming onto the podium with the EQC, and watch what they are doing there: the elevated position allowed them to take better pictures of the Bell Nexus flying taxi on the neighboring booth.

Here are a few pictures of the Vision Urbanetic: 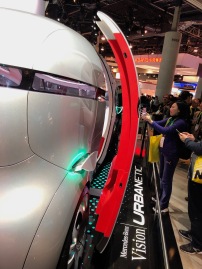 A video of the remote controlled drive of the Vision Urbanetic on the Strip by Engadget can be found here: